Rosenort was discovered by Heinrich Ratzlaff, the first Mayor of Rosenort in the late 1800s. Ratzlaff wrote on a tree “it is good to be here, let us build our home”, and built they were. Well-built homes, fine gardens and finely tendered farms defined the thriving community.

The Credit Union and Co-op reflect the value of sharing, while the churches speak for the importance of spirituality. Rosenort is especially known for its accomplishments in the industrial sector. Businesses such as Westfield, K-Tec, Duracon, Prairie Welding, Dirt Pro, Midland Manufacturing, Novid and many more.

First Mennonite settlers to the Rosenhoff and Rosenort areas lived fairly close together in villages according to European custom.

In 1932 the Rosenort Farmers Assoc. established a co-operative just north of the former village, in what became Rosenort. In the following years several businesses and a Credit Union were established. (Furrows in the Valley: 1880-1980, p. 350) 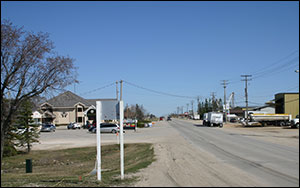 These river trails, created and improved upon as part of Canada’s Economic Action Plan, build along once existing trails on the Morris R. and auxiliary flood diversion channels.

They tie together residential and shopping areas, schools, an arena and park, providing all-season pathways. 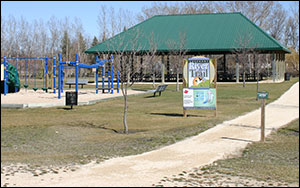 Municipal bridges are a necessity to cross the Morris River, and replaced over time, built to facilitate efficient movement of vehicles and goods in the area. 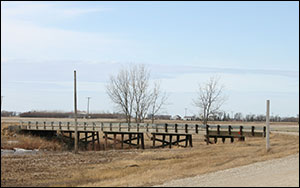 This house, originally the home of Peter Goossen family, and later, son George Goossen, was a farmyard residence on the edge of Rosenort until the 1990s.

Now resituated to the front of the site, and within a new housing complex, it is operated as a café and Tea Room. 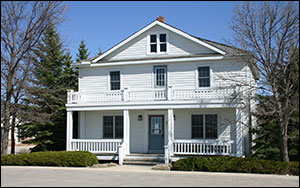 Now a field, this site was once Lone Star School District No 1929.

The one-room school operated from 1914 until 1955 when the school district was dissolved and children taken to consolidated schools. 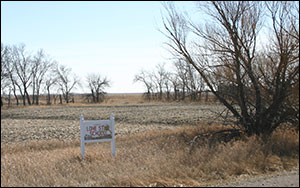 This small, unmarked cemetery, located on River Road south of Rosenort, is the only remaining element of what first had a church with schoolyard opposite.

The heritage cemetery, with community walkway in front, is now a quiet reminder of the community’s past and what was once a busy corner in the Rosenort area. 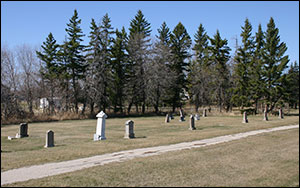 On River Road south is the location of a wind-powered flour mill that operated in the Rosenort area for about 42 years.

First built in 1877–78 and operated in Steinbach (where little wind was found), it was dismantled and moved to the Rosenort area in 1879. The structure, which stood 60 feet high, was built with the help of nearly all trained in Russia. 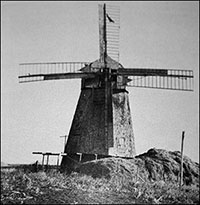 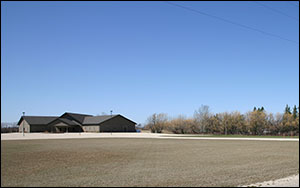 This unmarked cemetery, used approximately 1907–30, is also the site of Rosenhoff’s first school and church (est. 1887).

Located just east of the former village of Rosenhoff, it remains a quiet rural cemetery off a gravel road. 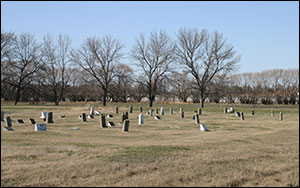 This now fenced and grassed site is the former school grounds of Rosenhoff South SD No. 61.

Located a short distance south of the once village of Rosenhoff, the wooden one-room school operated until 1965 when it was closed, the building moved and adjoined to Rosenhoff North School. The unmarked site now has few foundation remains. 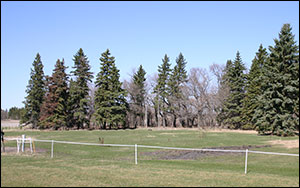 This cemetery, used approximately 1874–1907, is the first burial site of Mennonite settlers to the Rosenhoff area, and is the site of 22 unmarked graves.

Denoted with a limestone monument and plaque, the cemetery is located at what is now a main crossroads in the small community of Riverside. 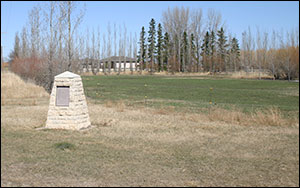 This church and cemetery site located just south of Rosenort, was established for Evangelical Mennonites (Kleinegemeinde), with the first church built in 1920 and the cemetery established in 1934.

In 1949 a larger church was built, and destroyed by fire in 1973, was again replaced in 1974 with the present edifice now located on the opposite (north) side of the road. 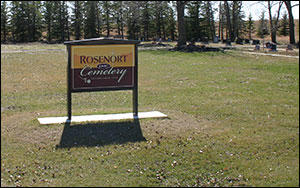