The Aubigny hall is the activity centre in this peaceful community located on the East side of the Red River, near highway 75. It is a close knit community that people can call home. Only 40.5 kilometers from Winnipeg, it’s a quick drive to the big city, with a cozy small town feel.

Aubigny is mostly a French-speaking community that consists of several homes and a Roman Catholic Church.

When the steamboats came down the Red, the landing at Union Point was a place where settlers arrived, disembarked and traveled to their homesteads. It is believed that Union Point derived its name from the fact that it was a central post office in Manitoba, and from there the mail continued on its routes—east, west, north and south.

Founded in 1903 and named for French nobleman, Count Antoine d’Aubigny, Aubigny’s first church was a wooden structure, replaced with the present brick structure in 1932.

Rebuilt after a tornado in 1978, the church is on a site that comprises a cemetery, and former rectory built in 1903 and serving as a convent 1932-67. 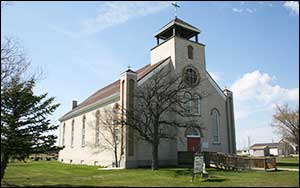 This ferry crossing near Aubigny, and on land owned by the Chartier family, initially provided the only means of crossing the river, and was used from about 1881 until 1965 when it was replaced by the nearby Aubigny bridge.

First known as Mousseau’s ferry (for its operator’s name), it provided a crossing for people on the east and west sides of the Red River and was the site of many events. 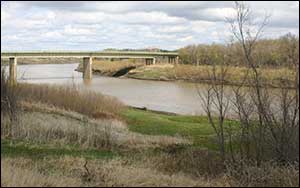 This short row of summer and year-round homes, come to be known as Cottage Country, has grown along PR 246 between Morris and Aubigny, and is located near the east bank of the Red River.

This sites are private property. Please respect the owners’ privacy. 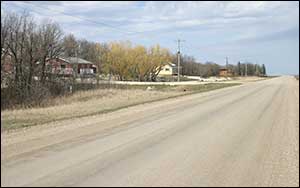 A municipally designated site, Union Point Church is a small country church with cemetery. The church was built in 1887, destroyed by fire in 1939 and rebuilt in 1940.

It is the last built feature that remains of Union Point. The first burial on the site is noted being in 1879. 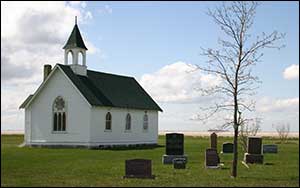 This dwelling, formerly owned by Hon. Richard Spink Bowles, Lieutenant Governor of Manitoba (1965–70), replaced an original farmhouse, and was moved by Bowles in1960–62 from Winnipeg where it was originally situated on Kingston Row. 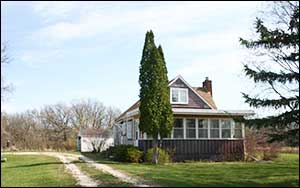 This log house, one of the oldest surviving buildings in the community, was built by Sevoine Robert who came with his family from Quebec to Manitoba in 1880 (Furrows In The Valley, p. 194).

Much unchanged and located on its original River Lot between Hwy 75 and the Red River north of Silver Plains, it remains with Robert family descendants. 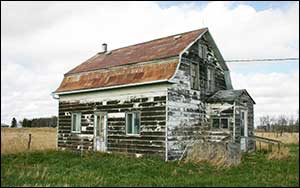 This log building remains the oldest family house in the RM. It was built by Flavien Chartier, one of first settlers who came from Quebec to Manitoba in 1877. Wood for the house was thought to have come from land further east and was brought down the river with them.

The river lot is still owned by the Chartier family and has been the farm to five generations of family descendants. (Furrows In the Valley, p. 190) 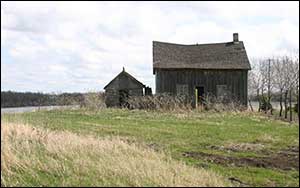 This machine shed is located on the original River Lot established by Henry Snarr in 1874, and that has been the home property to four generations of Snarr families. The shed was built for Charles R. Snarr, and in 1980 moved from nearer the Red River.

The 1949 barn on the farmyard, originally a stable for nearby Carleton School, was moved from the SD about 1960s. 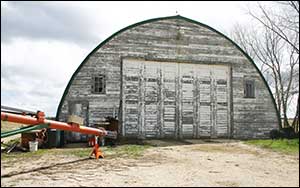 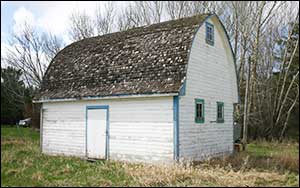