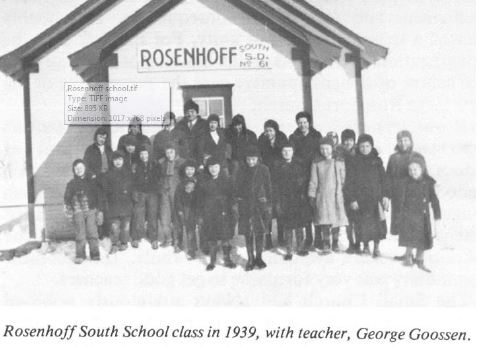 In 1874 both towns settled. Named by the villagers as suggested by the founder and delegate from Russia David Klassen who noted in his report to them after he visited in 1873 that the land was fertile as indicated by the abundant wild roses growing everywhere. The names mean place of roses (Rosenort) and yard of Roses (Rosenhoff). Riverside was renamed after the new store was built in Rosenhoff and a contest held to name it. Riverside was the name given to the store and the village changed its name afterwards. Page: 327 Furrows of the Valley

When the Mennonites decided they wanted to move to America, they sent delegates ahead to “look over the land”. One of these delegates, David Klassen, was interested in the land along the Scratching River, and when he returned to Russia, he told his friends and relatives about the good farm land, and the abundance of wild roses he had seen growing there. While visiting Canada, David Klassen made a deal with the land agent, to erect a large building, so there would be temporary shelter for families when they arrived. They were greeted with disappointment, when they discovered on their arrival, that this promise was not kept. Since no surveying had been done, and no buildings erected, many families decided to settle in Winnipeg for the winter months. The men folk only, came to help establish those families who decided to brave the winter. David Klassen’s family while in Winnipeg, discovered there was a demand for milk, so to help with a badly needed income, they bought some cows. In spring of 1875, the pioneers moved to the Scratching River settlement, settling in two villages, Rosenhoff, and Rosenort. They were about 5 miles and eight miles northwest of Morris.