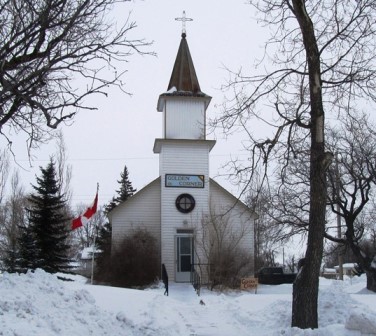 It was in the year 1930 that Father Gustave Couture became parish priest in Starbuck and he became very enthused about Sperling having a little church of its own, so he started to organize the people in doing something about it.

By 1935, through Father Couture’s zeal and enthusiasm, they had gathered $650.00 and with a donation of $500.00 by Miss E. Burnie, through Catholic Extension service. Miss Burnie donated the money in memory of her sister, Miss Rose Burnie, and she asked that the chapelle be dedicated to the Ste. Theresa, known as the Little Flower of Jesus.

The building, known later as the Sperling Catholic Church, was bought.  This building had quite a history in itself, as it had been the first school at Sperling, at the time it was situated at about one mile north of the  railroad, and apparently known as the Waddell School.  After Sperling built their large four-room school in town, the old school was moved to its present site and used for years as a private home.  It was then owned by the Royal Bank at Carman.  Father Couture made all the little arrangements to have it remodeled into a lovely little chapel.  This chapel was the pride and joy of all the Catholic Parishioners of Sperling for 37 years.

The full story  can be viewed in the Furrows of the Valley starting on page 755.

First married couple in the Sperling Catholic Church in 1939.