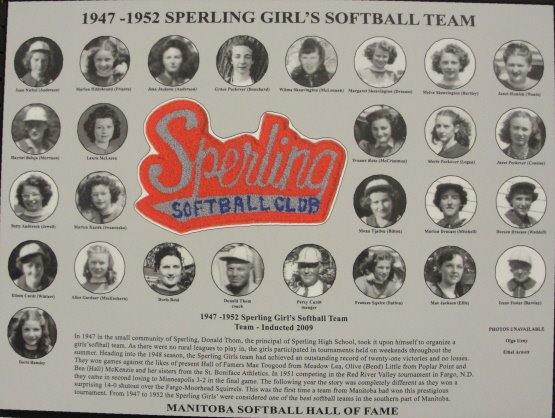 In 1947 in the small community of Sperling with a population of two hundred, Donald Thom, the High School Principal,organized a girls softball team. The team went undefeated winning twenty-one tournament and exhibition games that first year.  In 1951 the senior girl’s high school team lost in the finals at the prestigious Red River Valley tournament at Fargo, N.D.  At tournaments in Manitoba they defeated such teams as the St. Boniface Athletics with Bea McKenzie and her sister’s playing for St. Boniface as well as Poplar Point with Olive Little pitching for Poplar Point. Then in 1952 after being runners-up in 1951, the Sperling girls won the Red River Valley tournament in Fargo.

Article from The Valley Leader in 2009- By Gene Still

The honours keep on coming for the 1947-1952 Sperling girls softball team.

They were among the 2009 inductees into the Manitoba Softball Hall of Fame. And on Tuesday they came “home” to Sperling and had plaque unveiled at the local rink to commemorate their induction into the hall.

The club was among ten individuals and three teams admitted into the softball hall this year.

Margaret Dracass, who resides in Carman, was a member of the club from 1947-1952. The former first baseman said she has nothing but great memories about being part of the special squad.

“It was just fun,” Dracass said. “And we did win our share of games.”

Jean Anderson was a teacher in Sperling at the time and played centerfield and third base from 1949-1950.

Anderson, who also lives in Carman, said it’s still hard to believe that they’re part of provincial softball history with their May 2 induction into the hall of fame.

“It’s just kind of ‘numbing’. You never expect it and it still really hasn’t sunk in yet,” Anderson said.

“It was a great honour and something we never expected.”

Dracass said being part of hall induction ceremonies was an honour and a chance to meet again in person, with friends and former teammates.

“It was exciting,” Dracass said. “We just had a great evening. It was just like having a reunion getting to see everyone again.”

Another former player, Alice McEachern, was part of the team during the first few years and she said it was great to have been part of the squad. She added that she joins another family member as a part of a hall of fame.

“I really enjoyed my time,” McEachern said. “And it’s kind of unique because my son Gary is in the Manitoba Baseball Hall of Fame going in as a member of the Goldeyes about five years or so ago.”

The Sperling team was formed in 1947 drawing on players from a community which at the time had a population of approximately two hundred people.

But the size didn’t stop high school principal Donald Thom from organizing a talented girls softball team. And what a team it was as they went undefeated in their first year, winning twenty-one tournament and exhibition games.

“Our coach Donald Thom really brought us together,” Anderson said.

Dracass agreed, adding that playing “ball” was also a natural pastime for most of the girls growing up.

“He was really sportsminded,” Dracass said about Thom. “And we all grew up playing ball for fun.

“It was a natural thing to do.”

The club made it to the finals of the Red River Valley tournament at Fargo, North Dakota in 1951, falling just short. But the following season they returned and made the most of their second chance emerging as champions.

And during tournaments in Manitoba they beat clubs such as the St. Boniface Athletics that was able to draw on players from a much larger population base. Anderson said help from family members was also important to their success.

“We had a lot of support from our parents, cheering us on and driving us around at times,” she said.

Anderson added that it was a time she and her teammates will never forget.

“There are a lot of fond memories with the camaraderie we all shared,” she said. “It was just a lovely way of having fun.”